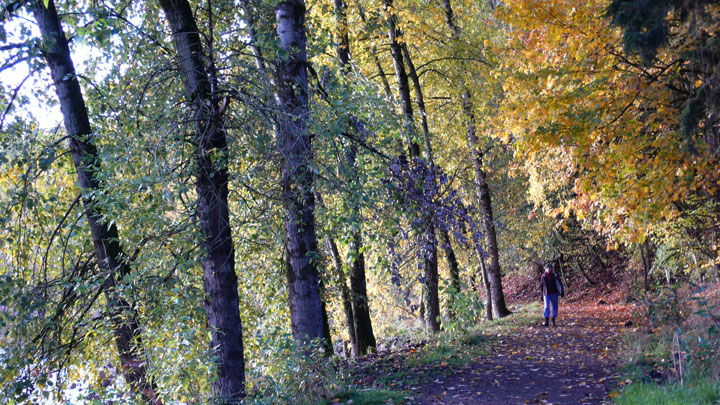 How to take better photos and pictures

Good photos are any that you want to look at, but there are some features that all good photos share beyond personal involvement. Composition, lighting, line and contrast can be adjusted to make a photo more pleasant to view.

In the photo above the composition is based on the rule of thirds, which is nor really a rule, just a suggestion. Pass the cursor over the image and a grid will appear. Notice that in this photo two thirds of the horizontal space is silhouetted trees and the top two thirds of the vertical space is trees. The walking figure is in the bottom right third. The figure's placement gives a sense of moving forward, in spite of this being a fixed image. If the figure had been place dead center there would be no forward sense. Composing with the rule of thirds lets a photo tell a story and keeps it from being static. Unbalanced composition is not good for all images. Some can be symmetrically balanced and still be pleasing. Just take care to not have the horizon line split the picture 50/50... usually a landscape is a sky photo or a land photo, with 1/3 being sky or land and vice versa. In the photo above, had the bit of sky extended all the way across the top of the photo, it would have been in the upper third, with the land and trees taking the bottom third.

The contrast of the dark tree trunks with the lighter background helps add interest. If this had been taken on a cloudy day the light would have been flat and less interesting. However, the diagonal line of the path leading away would still have worked to make the image interesting. Diagonal lines make for movement in a photo, whereas right angle lines add stability. In this photo the figure is not exactly on the line where the thirds cross, it is fudged a bit even more off center. I like that kind of photo, but that is why the rule of thirds is not a rule. Just find where the frame you are putting around a scene looks the best.